"Newsletter of the International Federation of Library Associations and Institutions" Journal 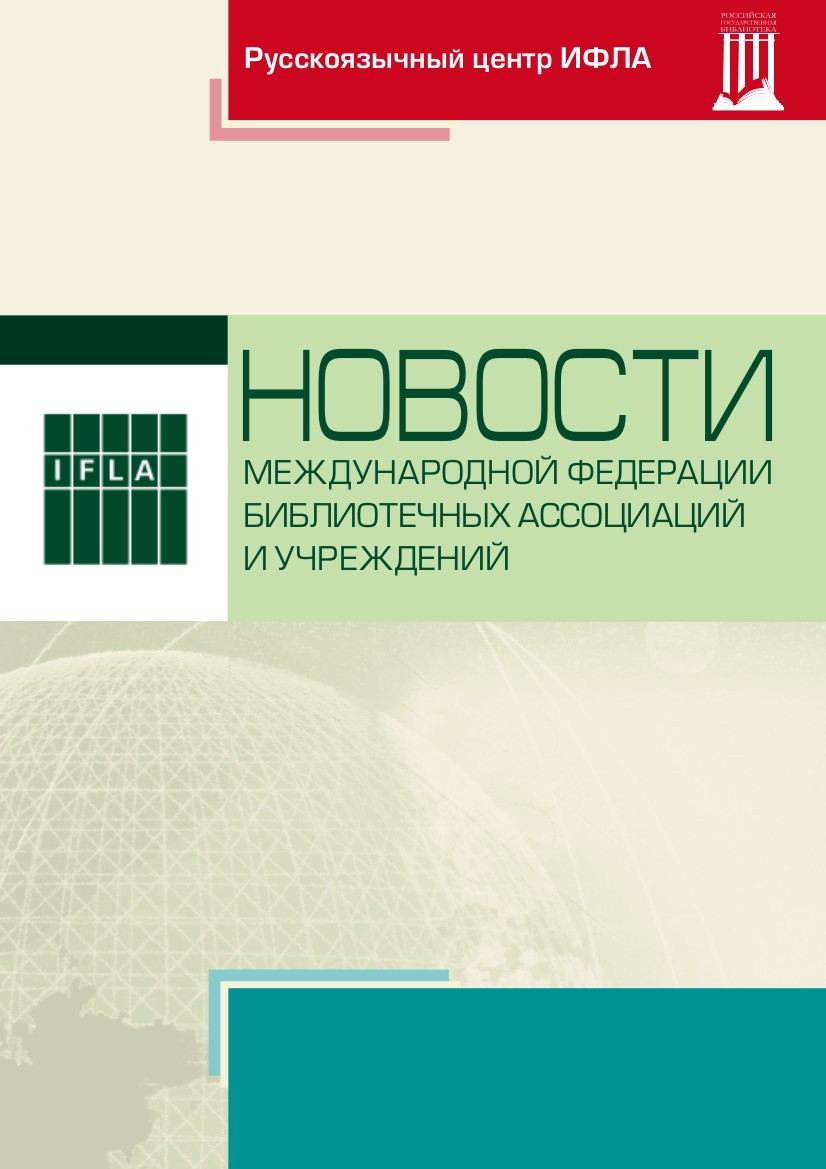 "Newsletter of the International Federation of Library Associations and Institutions (IFLA)" — is a research and practical periodical, issued by the Russian State Library. This periodical, unique in the Russian library field, updates on IFLA and its international partner organizations’ activities, in particularly, UNESCO.

Russian library specialists strongly need more comprehensive and consistent coverage of IFLA’s activities. The journal reflects its history, purposes, core activities and official policy documents. Special attention is given to the activities of the governing elective bodies and involvement of the Russian librarians in them. The periodical regularly updates on IFLA’s annual World and Library Information Congress and General Assembly.

One of the regular columns is IFLA’s cooperation with other international organizations, such as CDNL, CENL, IAML and LIBER. The publications and digests of IFLA’s major periodicals are particularly important, especially IFLA Journal. Traditionally, from the very first issue of the newsletter (Vol. 20, 1994, No. 2) reviews and digests of IFLA Journal publications are submitted to the RSL by IFLA Journal’s Editor before the source issue is out of print.

The journal started in 1994 as "News of the Russian IFLA Committee" newsletter, under the aegis of the Russian Library Association, which had approved this initiative of the Russian State Library. It should be also noted that a special role in the creation of the "News…" was played by Olga Alekseevna Diakonova (1929—2014), Head (1976—1989) and specialist of the Foreign Library and Information Science and International relations department, who was an initiator, translator, editor and author of the journal.

In 2005 "News of the Russian IFLA Committee" was transformed into a subscription-based journal with the issues double-numbered, to retain the consecutive numeration representing the journal’s history.

In 2007 the title of "News of the Russian IFLA Committee" changed for "Newsletter of the International Federation of Library Associations and Institutions".

Since 2014 the journal has been published in the electronic form only and has been uploaded on the RSL website publicly available to the readers.

In 2017 the design of the journal was renewed. The technologies of electronic publishing have allowed to use the colour palette of the official IFLA web-site for more brightness and attractiveness.

Subscription code in the joint catalogue ’Press of Russia’ — none.

Duda, of the Journal, Director General of the Russian State Library (RSL)

of the Journal, Head of the Department of Periodicals, RSL

, Head of the Foreign Library and Information Science and International Relations Department, RSL

, Director for International and Educational Activities of the State Library for Foreign Literature

, Deputy  — Executive Secretary of the Department of Periodicals, RSL